I took this place from the website of the Vega astronomy club of the municipality of Cap Rouge. It is a small farmer's land and is the end of a dirt road, which is south of Quebec City in the middle of small villages, of which Saint Agapit is the closest.

Step 1 .- This place is a little complicated to reach because it is a small dirt road, it is preferable to bring a GPS or a phone with Google Maps. It is located on the south side of the Saint Laurent river, in the area of villages like Saint-Nicolas. From Quebec City, take highway 20 in the direction of Montreal. Continue straight and take exit 291 towards the village of Saint-Apollinaire. Continue straight on route 273 south until you reach the village of Saint-Agapit.

Step 2. - Here are the important instructions: After passing the village of St. Agapit, heading south on route 273 towards St. Gilles, count the "rang". Turn right on the second one, that is, on the rang after having passed the third one (that's the name, it doesn't mean it's the third one). Go to the bottom as far as the end of the route.

The observation site
This place is a small esplanade within extensive farm fields (the time I went with a Brazilian friend his car was left stinking of cow's odor). The place has a good horizon but unlike others I see that the light pollution of the surrounding municipalities does affect something. The advantage is that it is possible to rent accommodation nearby. Since we could assume that it is a "private land" (and I put it in quotes because they allow the public to make observations) and it is small, they do not allow to camp there. 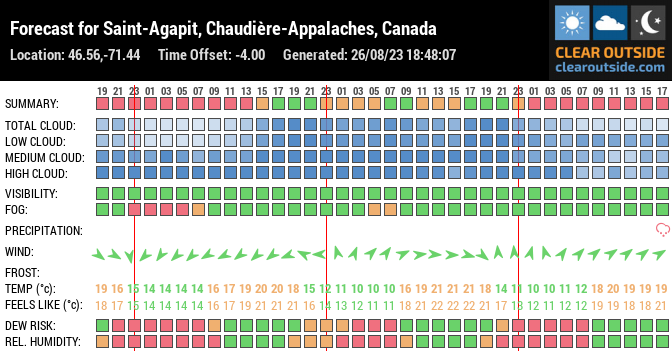